You are here: North Walsham Guide / Printed Guide / History of the Guide 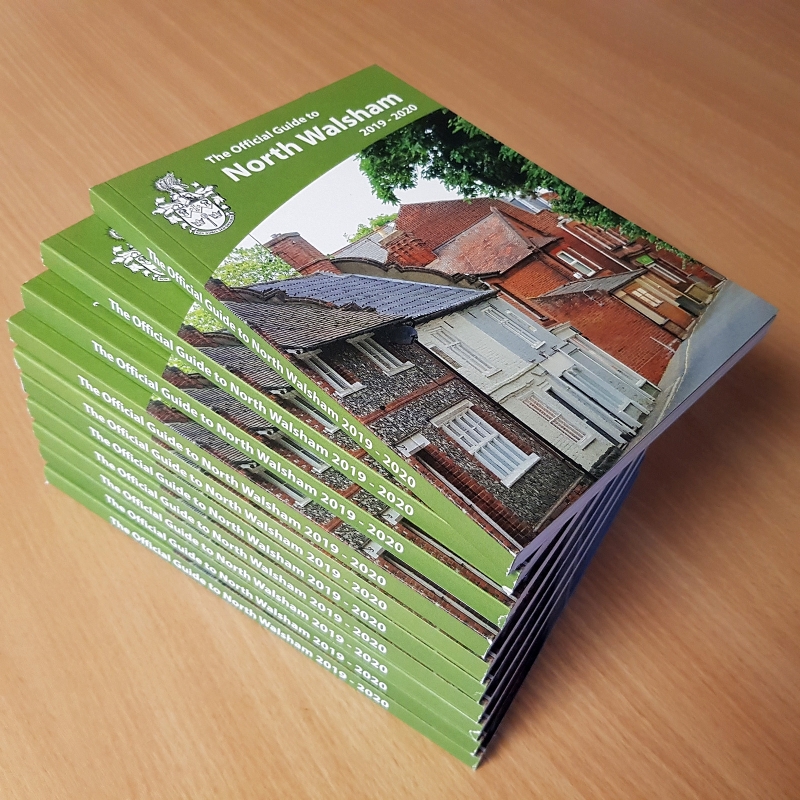 The Official North Walsham Town Guide is the latest in a long line of official town guides which we can date back over a hundred years. The earliest edition we have in the North Walsham archives is from 1911 called "A Handy Guide to North Walsham, Norfolk with an account of the Norfolk Broads." and was produced in London by The Homeland Association Ltd in London. By the 1950s the guide was produced by the publicity committee of the North Walsham & District Chamber of Trade & Commerce with the authority of the North Walsham Urban District Council and printed by Rounce & Wortley of Market Street, North Walsham. These earlier editions are all printed using the Letterpress printing method and feature photos mainly taken by North Walsham photographer R. E. R. Ling, gradfather of Mike Ling, the original chairman of North Walsham's thriving Archive Committee. Wayne Beauchamp, producing the new Town Guide, is now chairman of the North Walsham and District Community Archive. These earlier editions are essential to anybody researching the history of North Walsham and fascinating to anybody even marginally interested in the town. Each guide shows a snapshot of our Norfolk Market Town frozen in time with locally famous names such as Harmer & Scott, Fuller's, Loads, Ling's, Blyth's, Oliver & Griston, Leeders, Marjoram Bros, Jarvis Bros, Randell's, Newson's, The Egg Packing Station, etc. the list goes on and on. Many of these names now imortalised in local street names. By the 1970s the format of the guide had changed somewhat from the smaller 'pocket size' edition of previous decades which had also varied little in appearance all those years. It appears that the guide also merged with another regular publication of previous years "The North Walsham Directory". The directory had purely been a list of every household in the town listed in alphabetical order by the surname of the household's representative. The 1967 edition of the directory costing a mere two shillings and sixpence. The 1974-75 edition of the guide had been promoted to the the "North Walsham Official Guide and Residents Directory" and issued under the auspices of "North Walsham Town Council". No longer the "Urban District Council" as all Urban District Councils were abolished in 1974 under the Local Government Act of 1972. This edition was published by Charles N. Veal & company from Wisbech. The directory is still fascinating to read if you grew up in the town just to see all those names of neighbours and school mates. This directory still exists in the 1980-1981 and 1984-1985 editions albeit updated accordingly and by these ditions the printing method had evolved to use the modern Litho method still in use today. It's hard to believe such a directory, so publically available, would ever be endorsed today. What is great to see in these eighties editions are businesses such as East Coast Plastics and M & K Richardson Sawmill who were still advertising in the last guide in 2013, over 30 years later. The 1984-1985 edition had changed allegiance slightly to now be published by the North Walsham Chamber of Trade and costing 75p.

Things went quiet for a few years but in 1993 the responsibility of producing "Your Guide to North Walsham" was handed to Express Printing of North Walsham working from a small unit on Laundry Loke (yes anybody outside of Norfolk had no idea what a "loke" was). Express Printing was run since the early 1980s by the local Choirmaster; Roger Buck with a small workforce of North Walsham 'lads' who carried out the whole process of producing the guide from acquing advertising, taking photographs, compiling the information, producing the layout artwork, printing and assembling the book (all in house) and delivering. they were also responsible for town's magazine at the time the "Shopping Times". Wayne Beauchamp (now taking over the ropes) was one of the members of this team. The directory was dropped from this edition and never reinstated. Over the years the guide was produced by this team, initially on behalf of the North Walsham Town Council and North Walsham Chamber of Trade but later for the Town Council only. Express Printing produced their last edition in 2010 for the years 2010-2011. It was at the end of 2011 that Express Printing's proprietor Roger Buck retired selling all of the printing firm's equipment to East Coast Plastics who had been a regular customer for many years. All of the staff were also given jobs by East Coast and the printing firm functioned as an in-house plant for East Coast. Roger Buck, one of the town's well known characters, didn't have much of a retirement when he was suddenly taken ill and died in early 2012. One more edition of the "Official North Walsham Town Guide" was published after that with Town Clerk Margaret Foster at the helm. The 2013-2014 edition was produced by the same team has had been producing the guide for the previous 20 years and this time printed by the East Coast Plastics in house print department. Margaret Foster, Involved in North Walsham's local government since the 1960s and became Town Clerk for the last 17 years of that time, retired shortly after production of this edition and the guide.

In 2019, after much consultation with North Walsham Town Council, the guide was revitalised and relaunched by Wayne Beauchamp with the assistance of the town council and a lovely team of local residents who produced the biggest and most complete edition of the guide so far!