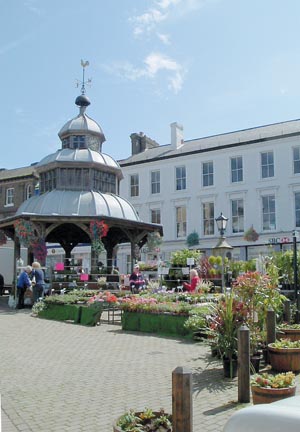 The Market Place provided a place where local traders could sell their produce, livestock, meats, and of course the wool and famous cloths. Many of the narrower shops in the Market Place still occupy their ancient plots, in multiples of seven feet, huddled tightly against the foreland of the churchyard. The meat markets were in an area known as The Shambles, mostly lost in the great fire but remembered today in buildings known as The Butchery. In the mid thirteenth century Walsham was given by Royal Charter of Henry III the right to hold a weekly market. A plot in the market wasnt free, and the rent was collected in The Old Tollhouse. The Market Rental Book of 1391 states that the cross fixed the site of the market as being a place where buyers and sellers could lawfully congregate. This was probably a stone post with the tollhouse located close by. As the market prospered, it was found necessary to provide a larger tollhouse, and a new market cross was built.

This market cross was started in 1550 during the reign of Edward VI by Bishop Thirlby of Norwich but doesnt seem to have been completed until 1555. The Great Fire of 1600 destroyed this building along with the Market, but it was rebuilt by Bishop Redman in 1602 to an unusual design. A one handed clock was acquired from Worstead Hall in 1787 and in 1855 its owners, the Ecclesiastical Commissioners, formally presented the Market Cross to the town. A minute hand was added to the clock the following year. In 1899 funds from the North Walsham Steeplechase were used to buy a new chiming clock. During the second world war the weathervane was blown off when a bomb exploded close by. The cross has been restored several times, the latest being in 1984 when the old roof covering was replaced with the present lead and the clock restored into working order. A piece of ancient oak which was removed from the cross at this time was locally carved as a representation of the head of Christ and presented to the people of our twin town of Friesenried in Bavaria. North Walshams famous Market Cross is a both a National Monument and a Grade I listed building. 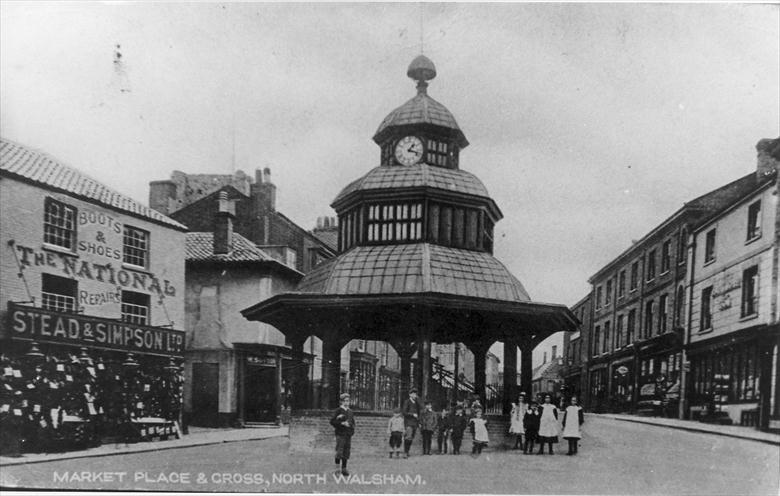 This and other lovely old photos of North Walsham Market Cross can be seen here on the North Walsham & District Community Archive website. Click Here to view.